Following the end of the filing deadline, I have updated several articles.

I also added a special article on the Kalamazoo County Commission.

The County Clerk has provided maps of all voting precincts. There are major changes in Oshtemo and smaller changes in Alamo, Texas, east Portage, and Pavilion.

Late Thursday night, State rep. Sean McCann presented rep. Margaret O'Brien, Speaker Jase Bolger, and Senator Tonya Schuitmaker with a proclamation to honor a 'gay rights' activist. They declined, given the fact that they had not had time to read and study it.

It was a set-up. Someone, probably McCann, created a controversy with the Gazette and local 'gay rights' groups. The first story appeared on Friday morning. McCann likely knew that Margaret, Jase, and Tonya would be traveling to the Michigan Republican convention on Friday afternoon and wouldn't have time to respond immediately.

Sean McCann created this controversy to divide people. In case it wasn't clear before, he is an unprincipled hack.
Posted by Conservative First at 1:53 PM No comments:

Congressman Upton has sent out a mailing bragging about his A rating from the NRA. The mailing was paid for by the taxpayers.

The practice of using taxpayer dollars to send out mail to a congressman's constituents is called franking. Some franking is genuine information, but a lot of it is campaign literature in disguise. They can't say "Vote for me!", but it has the same look and feel of campaign lit.

Franking may have had a legitimate purpose at one time, but there is no need for it in the age of email and the internet. It has long been one of the advantages that incumbents use to stay in office. Franking should be abolished.

By the way, Upton was hardly pro-gun in the 80s and 90s. He voted for the Brady Bill and responded to a survey saying he opposed concealed carry. Back then the NRA gave him a C. In 2002, Dale Shugars ran against Upton and received the NRA endorsement. Since then, Upton has voted pro-gun, but has never actively advocated gun rights.

State rep. Dave Agema, who often vied for the title of the most conservative member of the state house, defeated Saul Anuzis to be national committeeman. Agema had significant Tea Party support. He also was supported by the Yob faction of the state GOP, which has long battled with Saul. They seek to control the GOP apparatus for their own ends. For example, see:

Saul has done both good and bad things over the years. Hopefully he can put his talents to work for the Romney campaign.

Ron Paul reportedly won 6-8 delegates, with Romney winning the rest. In the 6th district, the Romney slate won rather easily, though there are claims that one of the members of that slate is a Paul delegate.

State party rules kept some Paul supporters out of this weekend's state convention because of preference shown to precinct delegates elected in 2010, de Angeli said.

Posted by Conservative First at 10:36 PM No comments:


Republicans won a 10-7 majority on the Kalamazoo County Commission in 2010. Redistricting will shrink the commission to 11 seats, changing the district boundaries. The new map is likely to yield a 7-4 Republican majority. Incumbents are marked below with asterisks. The following post has detailed descriptions of the districts and their political leanings. 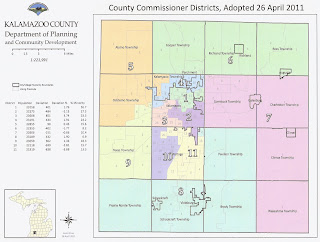 District 2 [SE Kalamazoo] Safe Democrat
Democrats: David Buskirk*
Republicans: none
Jack Urban deferred to fellow incumbent David Buskirk, who is unopposed. Buskirk is the board vice-chairman and has had this seat since 1992.

District 6 [Cooper, Richland, Ross] Safe Republican
Democrats: Tom Novak
Republicans: Jeff Heppler*
Heppler has been on the board since 2002. Pominville was appointed in 2012 to replace Deb Buchholtz, who resigned. Heppler defeated Pominville and newcomer Neal Turluck. Novak applied to the seat claiming to be an independent and received the votes of all the democrats.

District 8 [Pavillion, Brady, Schoolcraft, Prairie Ronde] Safe Republican
Democrats: none
Republicans: David Maturen*
Conservative John Gisler deferred to moderate board chairman David Maturen, who has been on the board since 2002.

District 11 [E Portage] Safe Republican
Democrats: Jamie Jager
Republicans: John Zull*
Zull has been on the board since 2000. Jager was nominated as a write-in.
Posted by Conservative First at 8:36 PM No comments:

Fred Upton voted against reauthorizing the Export-Import Bank, which is essentially a vehicle for corporate welfare. This is interesting since most of the votes against were conservative Republicans, with establishment Republicans supporting it. The bill passed 330-93. What could be inclining Upton to vote conservative?

In Michigan, Amash, Huizinga, and Walberg also opposed the bill.
Posted by Conservative First at 3:04 AM No comments:

Mark Behnke, a former Mayor of Battle Creek, Calhoun County Commissioner, and current Battle Creek city commissioner will challenge democrat Kate Segal for the 62nd state house seat. The 62nd got more democrat in redistricting, adding Bedford. If any Republican can win it, it would be Behnke.

Mark Behnke challenges Kate Segal
Posted by Conservative First at 2:04 AM No comments:

The exact same letter from Chadwick Dillon was submitted to three different papers. The papers write the headlines, of course.

As a WMU CR alum, I've learned quite a bit about the conservative movement and debating with the left. I've now taken that skill and now I'm contributing to Misfit Politics. If you'd like to see some of what I've been up to, head over here. Hopefully you'll be able to find some useful information when you run into a liberal.
Posted by Dan Roth at 11:40 PM No comments:

Indiana Republicans tossed out longtime (36 year) senator Dick Lugar. Treasurer Richard Mourdock won by a huge 61%-39% margin. Lugar is an establishment Republican (ACU 77%) who has an F rating from the NRA. He is a foreign policy internationalist who loves the United Nations and the awful Law of the Sea Treaty.

Could another Republican incumbent lose just to the north in Michigan 6?

http://www.electionmagic.com/results/mi/K39results/K3900101sum.htm
Posted by Conservative First at 11:24 PM No comments:

Democrat Grace Borgfjord is challenging Republican Mary Balkema to be Kalamazoo County Treasurer. Balkema was first appointed in 2007 to replace the retiring Sharon Cubitt and was narrowly elected to a full term in 2008 in a bad year for Republicans.

Borgfjord holds two elected offices. As a member of the Mattawan School Board, Borgfjord twice voted for massive tax increases that were rejected by Mattawan voters.

In 2006, she ran a Republican for Oshtemo township board, narrowly losing to Jim Grace in the primary. Two years later, she ran as a democrat, winning in the 2008 wave. Clearly, she was misrepresenting herself when she first ran.

She was involved in a controversy over benefits received by the part-time township trustees.

It is likely that opposition to Balkema will stem more from the principled stand she took against the Kalamazoo discrimination ordinance than anything she has done as treasurer.

Borgfjord has almost no relevant experience and should not be trusted with Kalamazoo County's money.
Posted by Conservative First at 8:59 PM No comments:

It's about time. There is no excuse for the Republicans in Lansing not to have passed this already.

The Michigan House Judiciary Committee will have a hearing on Thursday, May 17, to review an important and long-overdue bill that would eliminate the state handgun “permit-to-purchase” and registration requirements. This committee will hear House Bill 5225 and consider this proposed amendment language that will be used as a substitute for HB 5225 when this hearing takes place.

HB 5225, introduced by state Representative Paul Opsommer (R-93), would abolish the bureaucratic “permit-to-purchase” handguns which became obsolete when the National Instant Criminal Background Check System (NICS) went into effect in 1998. Under the current state system, gun buyers must apply with their local law enforcement agency and pass a written test before being authorized to buy a handgun. This “permit” is valid for only one gun and it expires after ten days. Since 1998, federal law has required a national criminal records check for the purchase of any firearm from any gun dealer in every state. Some of the key points of the proposed amendment to HB 5225 are:

Repeal the state requirement for someone to ask for police permission to purchase a firearm by traveling to a local police station and obtaining a permit to purchase.

Repeal the requirement to register a completely legally purchased and owned firearm by a law-abiding citizen to be registered with the government through the police.

Adopt the use of the federally-funded National Instant Criminal Background Check System.

Default to the federal standard of prohibited persons and each purchase would still require a background check.

One of the groups sending out mailers attacking Jack Hoogendyk is Main Street Advocacy. This is a self-consciously moderate Republican group.

Politicians like Jack Hoogendyk keep raising our taxes to pay for more government spending, leaving us broke. Jack Hoogendyk is running for Congress claiming to be a fiscal conservative, but his rhetoric just doesn't match his record.

as a county commissioner, Jack Hoogendyk voted to raise spending on both budgets he voted on.

Hoogendyk twice voted to block property tax rollbacks that had been promised, and even voted to raise the hotel/motel tax to pay for more spending.

The record is clear: Jack Hoogendyk voted for higher taxes and more spending, leaving taxpayers with a lot less money in their wallets.

They are obviously getting their talking points straight from the Upton campaign. Fred Upton was a cofounder of the Republican Main Street Partnership.

Main Street Advocacy ran into some campaign finance trouble in Montana back in 2010. They had received $10,000 in funding from the Marxist Service Employees International Union (SEIU).

A group of Kalamazoo high school students staged a walkout on Mayday, the international communist holiday to protest against enforcement of immigration laws.

This quote was particularly juicy.

“The laws being created in Arizona — SB 1070 — are making us live in fear. We don’t know if our parents will be here when we come home from school. We drop out because what is the point if we are not guaranteed to be here,” said Leal, whose parents came to the United States from Mexico.

This is Michigan, not Arizona. And if you worry that your parents might be arrested, TELL THEM TO STOP BREAKING THE LAW.

Leave and don't come back.

Previous: Illegal Immigrants are Criminals
Posted by Conservative First at 3:55 AM No comments: