One of the arguments used by conservative supporters of Congressman Fred Upton is that Upton is more conservative now than he used to be.  Is there any merit to this argument?

To analyze this claim, we consider ratings issued by conservative groups over the years.  This will make it easy to spot any trend.

Of course, the usual caveats apply.  These ratings are calculated based on a selection of votes.  The votes rated each year are different, but these groups use fairly consistent standards that allow comparison over time.

First up is American Conservative Union (ACU), which has been rating Congress since the 1970s.  Their ratings for Upton's entire tenure are graphed below. 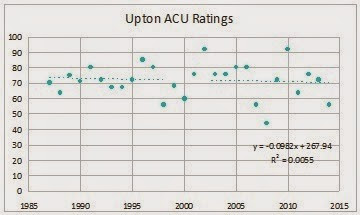 A linear regression line is graphed along with the data.  As you can see, the line is virtually flat, indicating no substantial change.  There is actually a very slight decrease over time.

Upton's two best ratings occurred in 2002 and 2010, both of which were years when Upton received serious primary challenges from the right.

Many conservatives consider ACU's ratings too generous.  More recently, several other organizations have begun their own ratings of Congress.  FreedomWorks is a libertarian-leaning organization that has rated Congress since 2005. 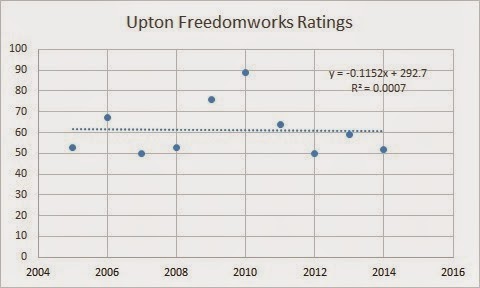 Once again, the regression line is essentially flat.  Upton's best year is also 2010.

Club for Growth is a free market organization that has also rated Congress since 2005. 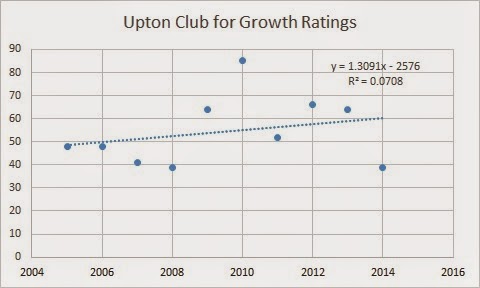 Here we do see an upward trend, but Upton 2014 rating ties for his worst, so there isn't much reason to expect the trend to continue.

Some supporters of Upton will cite his endorsements by Right to Life in 2012 and 2014, after not having been endorsed in any previous years, as evidence of improvement.  But this blog has documented Upton's long pro-abortion voting record in the past.  He has not publicly renounced these votes, which leads to the suspicion that Right to Life's endorsement was based on political considerations.

In fairness, there is one major issue on which Upton's record actually has gotten better.  Upton once had a very weak record on gun rights, with a 42% rating from the NRA in 2000.  Since then, his ratings have improved.  Upton usually votes the party line, but is not a leader on the issue.

Overall, though, Upton has not gotten any more conservative over the years.  The claim to the contrary is false.
Posted by Conservative First at 3:50 PM No comments:

Upton Votes for Illegal Aliens in the Military

Congressman Fred Upton was one of just twenty Republicans to vote for letting illegal aliens join the military.  The vote would have actually put illegals ahead of Americans.  Upton was the only Republican from Michigan to vote this way.

Brooks’ amendment, which stripped from the NDAA language that was inserted during the Armed Services Committee markup by Rep. Ruben Gallego (D-AZ) —a freshman liberal Democrat who wants to amnesty all the illegal aliens in America—passed the House of Representatives 221-202 on Thursday evening.

“Today is a great victory for Americans and lawful immigrants who wish to serve America in our Armed Forces,” Brooks said in a statement after the vote. “I asked my colleagues to consider how much American families are struggling in an anemic job and wage market and how much the Gallego amendment makes job and income prospects for Americans even worse. It makes no sense to me that, at the same time the Army is downsizing and issuing pink slips to American soldiers serving in Afghanistan, there are Congressmen who seek to help illegal aliens deprive American citizens and lawful immigrants of military service opportunities. I’m pleased the House chose to stand up for American citizens and protect the Constitutional duty of Congress to set immigration law. Today’s vote was the fourth rejection of the President’s unconstitutional DACA program, with Republicans overwhelming standing up for the will of the American people and the citizens and lawful immigrants who want to serve our country.”

Gallego’s amendment would have allowed illegal aliens who have received President Obama’s first executive amnesty—the Deferred Action for Childhood Arrivals (DACA), which some 800,000 or so illegal aliens have received—to enlist in the United States military. It would have come with an NDAA that reduces America’s force size—meaning the NDAA would have, if it weren’t for the Brooks amendment bolstered by conservatives like Reps. Rep. Steve King (R-IA) and Dave Brat (R-VA) among others, put illegal aliens ahead of Americans. What’s more, it would have used a defense bill—rather than an immigration bill—to do it.
Posted by Conservative First at 3:08 PM No comments:

The state senate passed a repeal of the prevailing wage law, which forces the government to overpay for construction projects.  The bill passed 22-15, with five Republicans voting no.

Many of them previously opposed Right to Work.

Notably, Mike Green and Ken Horn, who voted against Right to Work, voted for this bill.
Posted by Conservative First at 3:25 PM No comments:

Vote NO on Proposal 1!

Proposal 1 is on the ballot statewide on May 5. It would increase sales taxes from 6% to 7%, and also increase gas taxes and other fees. This would total two billion dollars each year. Of that, 40% goes to non-transportation spending, and some of the transportation spending does not go to roads. The proposal would also activate ten laws that were passed by the legislature. You can find more information at
https://michigantaxpayers.com/
http://saynotohighertaxes.org/

There will also be a KRESA tax increase on the ballot in school districts based in Kalamazoo County. It would be passed through to the districts to increase their budgets.

Please vote NO on both of these tax increases.

UPDATE:  Proposal 1 was destroyed with 80% voting against.  It lost every county and every major city except Ann Arbor, East Lansing, and Kalamazoo (which all contain major universities).  Now the dems are telling us that this was a rejection of Republicans (so why did dem legislators vote for it?)  Meanwhile, the major media (which endorsed it) says that this was not a rejection of tax increases.  Conservatives need to watch the legislature carefully and push for spending cuts, not tax increases, to provide additional money for road repair.
Posted by Conservative First at 3:50 PM No comments: