All 38 seats in the Michigan Senate are up for election in 2014.  Republicans currently have a 27-11 supermajority, and have controlled the senate since 1983.  Republican control of the state senate has prevented democrats from complete control of Michigan's government in some years, and stopped a lot of bad things from being passed.

The 2010 redistricting produced a map that was moderately pro-Republican, while complying with all relevant laws.

There are 26 open seats due to term-limits, 7 D and 19 R.  All current state senators are former state representatives except three (Colbeck, Conyers, Hertel).  Next year, three Detroit-based districts will have senators with no house experience.

For the past few years, the state senate has been more moderate than the state house.  This cycle, several ideologically split Republican primaries resulted in a state senate that will be slightly more conservative than before.

I have included election data for the 2014 state senate election, and McCain (2008), Romney (2012), and Trump (2016) results in each district.  More data is available from Republican Michigander and RRH Elections.

The McCain numbers look terrible for Republicans because he collapsed after publicly pulling out of Michigan.  The largest McCain percentage in any Michigan state senate district won by a democrat in the past twelve years is 46.2% in (old) district 31.

Here is a breakdown of the individual races.  State reps years in office are listed after their names, with P meaning present. 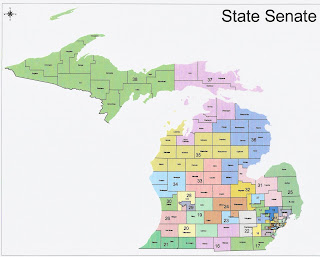 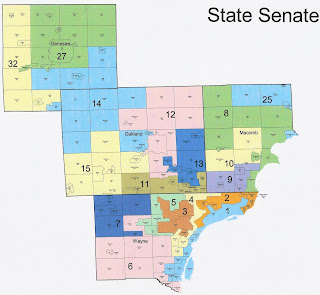 1. [Detroit riverfront, Downriver] Safe democrat
SS 2014: 28-72 McCain: 22.0 Romney: 21.5 Trump: XX
Incumbent: Coleman Young (D term-limited)
This is one of five black-majority districts based in Detroit.  Young, who lost badly in his bid for Detroit Mayor, is now running for Congress.  State rep Stephanie Chang (14-P) easily defeated Bettie Cook Scott (06-10, 16-18) and Alberta Tinsley-Talabi (10-16), along with along with James Cole, Nicholas Rivera, and Stephanie Roehm.  Chang is a progressive favorite who was insulted for racial reasons by Scott. Pauline Monte is the R candidate.

2. [NE Detroit, Grosse Pointes] Safe democrat
SS 2014: 25-71 McCain: 20.1 Romney: 19.3 Trump: XX
Incumbent:  Bert Johnson (D term-limited)
This is one of five black-majority districts based in Detroit.  Johnson pled guilty to theft (hiring a fake employee to pay a debt).  There will be a special election at the same time as the general election.  Incredibly, eleven Ds ran.  Adam Hollier, Johnson's former chief of staff, won the primary thanks to many endorsements, including that of Mayor Duggan.  In second was Hamtramck city commissioner Abraham Aiyash.  Third was eight-time felon and disgraced former rep Brian Banks (12-17), who resigned in a plea bargain.  Also running were former rep George Cushingberry Jr. (74-82, 04-10), who lost his seat on the Detroit city council due to scandal,  former rep John Olumba (10-14), who became an independent in 2013, and former state rep Lamar Lemmons (99-06).   Also-rans include Tommy Campbell, Lawrence Gannon, Anam Miah, William Phillips, and Regina Williams.  Lisa Papas beat John Hauler for the R nomination.

5. [W Detroit, Dearborn Heights, Garden City, Inkster, Redford] Safe democrat
SS 2014: 18-82 McCain: 20.6 Romney: 18.4 Trump: XX
Incumbent: David Knezek (D)
This is one of five black-majority districts based in Detroit.  Knezek, who is white, won a split primary with 29% in 2014. He was shockingly upset by Betty Alexander, a black woman who raised no money.  The upset was masterminded by her relative, former rep Lamar Lemmons III.  The R candidate is DeShawn Wilkins.

16. [Jackson, Hillsdale, Branch] Safe Republican
SS 2014: 61-39 McCain: 50.8 Romney: 55.6 Trump: 64.8
Incumbent: Mike Shirkey (R)
Shirkey, who led the fights for both Right to Work and Medicaid expansion, is the presumptive favorite to be the next senate majority leader.  He beat conservative Matt Dame, who had the support of previous incumbent Bruce Caswell.  The D candidate is Val Toops.