Doors will open at 6:30 p.m. and seating will be on a first-come basis. There will be no cost for the event.
Posted by Conservative First at 7:18 PM No comments:

Democrat John Waltz has dropped out of the race for the 6th congressional district for health reasons. Democrats are looking for a new candidate.

The Michigan legislature recently passed a redistricting plan for the Court of Appeals. This court is below the Michigan Supreme Court. It consists of 28 judges (2 currently vacant), which may soon be reduced to 24 under a bill to reduce the number of judges passed in Lansing. The court is split into four districts based in Detroit, Troy, Lansing, and Grand Rapids.

Here is the new district map. 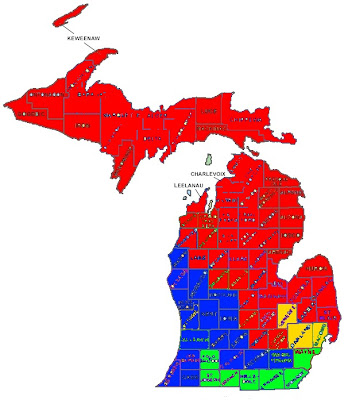 This is the old map.

The Court of Appeals is quite a different problem from usual redistricting plans. Incumbents have a huge advantage and are almost always reelected uncontested. This is because non-incumbents must collect a huge number of signatures (5000, I think), while incumbents can run for reelection simply by filing an affidavit. Furthermore, incumbents are listed as judges on the ballot, giving an additional advantage. Hence the only contested races are for the occasional open seat.

While the court is officially nonpartisan, conservatives have a significant advantage on the Court of Appeals due to the long tenure (1990-2002) of Governor John Engler, who appointed many of the judges to fill vacancies. Hence the goal is to draw four districts that aren't heavily dem, account for population changes, and if possible keep current incumbents in their districts.

District 3: (Grand Rapids) [West Michigan, Washtenaw] Adds Mason, Oceana, and Montcalm from 4 and Calhoun from 1. Loses Branch, St. Joseph, and Kalamazoo to 1. Washtenaw is kept in the most Republican district, as putting in with Wayne might be enough to consistently elect democrats.

Overall, it appears to be a reasonable map.
Posted by Conservative First at 6:01 PM No comments:

Republican Kalamazoo County Commissioner Nasim Ansari will challenge democrat incumbent Drain Commissioner Patricia Crowley. Ansaii has been a commissioner for ten years representing northern Portage. Before that, he was on the Portage city councilman.

Ansari's district was cut in half in redistricting, and was placing in the same district as John Zull (not Phil Stinchcomb, as the article says, unless Ansari recently moved). Ansari is a tough campaigner who held a competitive district for a decade. (He may well have more name recognition than Crowley, who was swept in on the 2008 democrat wave.) That said, I suspect that this race will go to whichever party does better overall in 2012.
Posted by Conservative First at 12:27 AM 1 comment:

Don't vote to raise taxes! Certainly not if you plan on getting reelected. And if you think something is a bad idea, then putting it on the ballot is also a bad idea.

Kalamazoo County commissioners still divided on tax to help homeless
Posted by Conservative First at 12:24 AM No comments:

Kate Upton gets votes of encouragement for Sports Illustrated cover: From the comments
Kate Upton Links: A look at Southwest Michigan's cover girl

Posted by Conservative First at 1:50 AM No comments:

Glenn Beck off the air at WKZO, replaced with local news hour

Write them to let know that they should bring Beck back: http://wkzo.com/contact-us/

In the mean time, you can hear Glenn Beck 27/7 here: http://www.glennbeck.com/publish/themes/glennbeck/live_player/
Posted by Conservative First at 2:07 AM No comments:

Democrat County Commissioner Brian Johnson will challenge Republican County Clerk Tim Snow. Snow has been clerk for over a decade and has not faced a serious challenge in some time.

Johnson lives in the same county commission district as Michael Seals, and would otherwise have run against him. Johnson has been on the county commission for a total of over 14 years (1986-1992, 2003-present). He does not appear to be particularly qualified to be clerk.
Posted by Conservative First at 1:21 AM 1 comment: