Some folks have already begun discussing what will happen to in the 2020 redistricting cycle, so I'll weigh in as well.  If keeps 14 districts, an incumbent protection map is likely, with small shifts necessary to account for changes in population.  However, has lost at least one congressional district for each of the last several cycles, and will probably lose another next time.  Republicans currently have a 9-5 advantage in the congressional delegation.  Can they stretch it to 9-4?  Yes, as the following map shows.
I should note that I am assuming that the population trends that have affected over the previous decade will continue.  In the previous decade, lost 240,000 people.  I assumed that will lose another 100,000 people.  According the census estimates, it has lost 28,000 in the last two years.  Hence I overpopulated the districts by 50,000 each, and underpopulated the Republican districts 10000-15000 each to compensate.  It is just barely possible to maintain two black majority districts with these numbers, which leaves little flexibility for how to draw them.
Many people have identified Sander Levin's 9th district as the most likely to be dismantled, and I agree.  I drew the two districts to pick up the most democrat parts of his district, with the rest going to two Republican districts.  The metro Detroit Republican districts have to change significantly to account for this.  John Dingell's Downriver/Ann Arbor district is mostly unchanged.
The key to the map, though, is the 5th district.  It currently contains , , and , along with some Republican and swing territory nearby.  There aren't any major dem areas adjacent to the district.  Packing it as efficiently as possible requires adding and , with Shiawassee as a connector.  This moves the district 5% to the left, and allows Republican districts in metro to take a few democrat areas, including and .
redistricting has followed the Apol standards for the past few decades.  Loosely speaking, they require minimizing county breaks.  This map does not, though it is close.  It may be possible to eliminate one or two breaks by shuffling around some territory in the West Michigan districts, depending on how exactly the populations end up.  It is important to remember that the Apol standards are a law that can be overridden by any other law, so they are really a strong tradition rather than an absolutely binding rule.
Here is the map.
﻿ 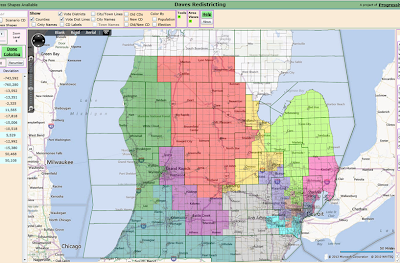 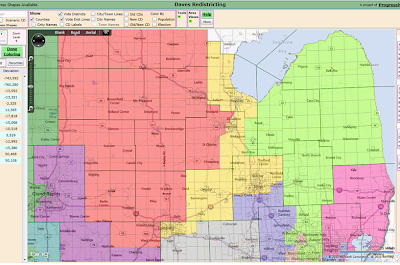 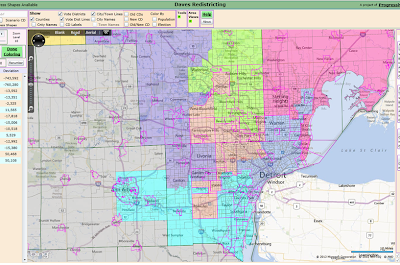 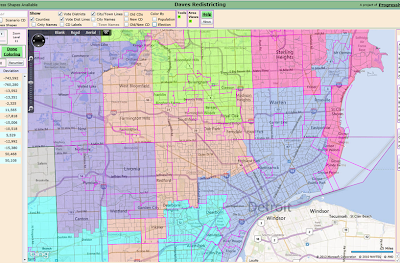 1. Secure the borders with a real fence like what Israel has.  Beef up the border patrol.  Use, drones, motion detectors, etc.
2. Establish a system to track entry and exit so we know who is the country.  Track whether foreign students, workers are where they are supposed to be.
3. Mandate E-verify.  Crack down on employers who knowingly hire illegals.
4. End all government benefits for illegals (including IDs).  No welfare for non-citizens.  Use E-verify to check.
5. 1-4 will cause most illegals to leave over time.  Deportation should focus on those with criminal records beyond  immigration violations and those who openly flaunt immigration laws.
6. No amnesty/legalization EVER for anyone who crossed the border illegally as an adult.
7. Reduce legal immigration.  Focus on entrepreneurs and those sectors with genuine shortages of workers (which can be identified by quickly increasing wages).
8. Require legal immigrants to be fluent in English and knowledgeable in basic civics, US history, etc.
9. End chain migration and the diversity visa.  End birthright citizenship.  Limit and reform refugee admissions (which are mostly fraudulent).
10. After 1-9 have been accomplished, then, and only then, should we allow a "path to citizenship" for illegals who were brought here as minors.
Posted by Conservative First at 9:27 PM No comments:

Totten previously spent $43.28 per vote to lose the 2010 democrat primary for state senate to Robert Jones.

Money On Fire Update!
Posted by Conservative First at 11:44 PM No comments:

Democrat congressman Gary Peters has announced that he will run for Senate to fill the seat of retiring democrat Senator Carl Levin.

Peters was a state senator 1994-2002 and lost a close race for Attorney General in 2002 to Mike Cox.  He was lottery commissioner in the Granholm administration.  In 2008 he defeated Republican incumbent Joe Knollenberg in a marginal district in a bad year for Republicans. In 2010, he narrowly survived against a flawed Republican challenger.

In 2012, Michigan lost a congressional district due to population loss.  Peters' district was dismantled, and he was placed in the same district as fellow democrat Sander Levin.  He chose instead to run against black democrat incumbent Hansen Clarke in the neighboring 14th district.

The 14th district is 57% black.  Due to population loss, it expanded into Oakland County, picking up black-majority Pontiac and Southfield and the white democrat areas of Farmington and West Bloomfield in between. The old version of the district was held by Hansen Clarke, a black democrat who had won a primary challenge against Carolyn Cheeks Kilpatrick, the mother of disgraced former Detroit Mayor Kwame Kilpatrick.

Clarke was initially thought to be the favorite over Peters (and several minor candidates) due to geography and race.  But then a funny thing happened.  Peters got almost all the major endorsements in the race, including most of the black democrat establishment in Detroit.


Peters has been racking up endorsements at an impressive clip, including those from Detroit Mayor Dave Bing, Wayne County Sheriff Benny Napoleon, several Detroit members of the state Legislature, the UAW, Michigan AFL-CIO, the American Federation of State, County and Municipal Employees-Michigan Council 25 and several others.

Why would they endorse a white guy from Oakland County?  Many folks speculated at the time that Peters had made a deal with them.  After ousting Clarke, he would serve only one term before running for Senate or Governor.  That would leave the seat open for the establishment to fill.

Of course, Peters won the primary.  Shortly after the election, Peters made an interesting hire.


The former chief of staff to Kwame Kilpatrick told a federal judge in 2010 that he took $20,000 in exchange for pushing through the sale of city property. He served 14 months in federal prison, was released about a year ago and started two years of supervised release.

Whatever else you might say about Peters, he isn't stupid.  Why else would he hire a convicted criminal unless he was paying off a political debt?

Now Peters is indeed vacating his seat after one term.

Peters chose to ally himself with the Detroit political establishment to stay in office.  The Michigan GOP should hammer him over this.
Posted by Conservative First at 11:47 AM No comments:

Taxes on the Ballot May 7

Kalamazoo County votes should remember that there is an election May 7.  A number of taxes, some increases and some renewals, will be on the ballot.

Republican Michigander has a very nice profile of Michigan's 6th congressional district, complete with maps of the 2012, 2008, and 2004 presidential elections in the district.

This is part of a series covering all of Michigan's congressional districts.