Michigan has a new congressional district map, thanks to the Michigan's Independent Redistricting Commission.  Michigan lost one seat in redistricting, and is left with 13.  The commission drew some poor lines, and skewed several districts (3 and 8) to the left in the name of partisan fairness, but also created several districts (7 and 10) that are winnable for each side. 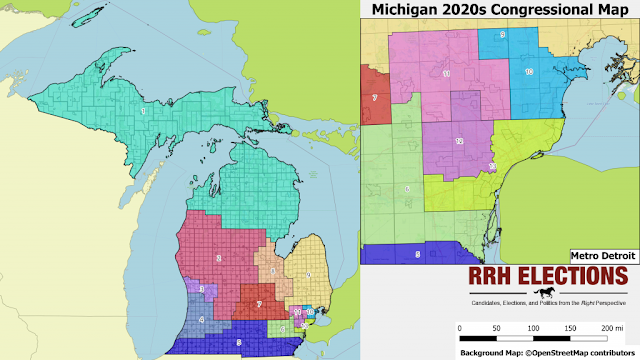 The map above is from the page at RRH Elections linked below, which also has individual district maps.
Michigan 2020s Congressional District Maps
Interactive versions of the map are available at Dave's Redistricting and 538.

Several incumbents had to move.  There have been two retirements, and there was one incumbent-v-incumbent primary and two open seats.  There will also be several interesting general election races.  Consider the districts in detail.