This alert from the NRA says that Governor Rick Snyder is stalling the bill to repeal handgun registration in Michigan. The bill passed the state house 74-36 in June.

This bill is long past due. Only six states require any form of gun registration. Michigan, California, Hawaii, and New York register handguns, and New Jersey and Connecticut register "assault weapons". The other five are all considerably more liberal than Michigan. 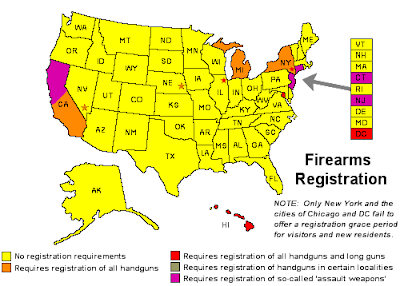 Here is the complete NRA alert.

Please contact your state Senator and Governor Snyder TODAY to get registration repealed before it is too late!

House Bill 5225, legislation that would eliminate the state handgun “permit-to-purchase” and registration requirements, is currently stalled in the Michigan Senate. The reason for this delay stems from opposition by the Michigan State Police and Governor Rick Snyder’s office asking the state Senate leadership to "hold" H.B. 5225. H.B. 5225, introduced by state Representative Paul Opsommer (R-93), would abolish the bureaucratic “permit-to-purchase” for handguns. This system became obsolete when the National Instant Criminal Background Check System (NICS) took effect in 1998. Under the current state system, gun buyers must apply with their local law enforcement agency before being authorized to buy a handgun. This “permit” is valid for only one gun and it expires after ten days. Since 1998, federal law has required a national criminal records check for the purchase of any firearm from any licensed gun dealer in every state. Accordingly, the state-required "permit" is duplicative, wasteful and antiquated. This legislative package includes two companion bills House Bill 5498, sponsored by state Representative Richard LeBlanc (D-18), and House Bill 5499, sponsored by state Representative Ray Franz (R-101).

In June, this package of bills passed in the Michigan House of Representatives by an overwhelming 74 to 36 vote. It has also passed in the Senate Judiciary Committee and now awaits consideration by the state Senate. All indications are that H.B. 5225 enjoys supermajority support in the Senate. There is no doubt that the state Senate will pass H.B. 5225 by a wide margin when they vote on it. However, Michigan's first-term Governor has now asked leaders in the Senate to hold this bill, delaying and preventing critical and final action on this important Second Amendment legislation. Because the Michigan Legislature has few remaining working days before the election, this stall tactic will almost guarantee the bill's demise.

It is extremely urgent that you contact your state Senator and especially Governor Rick Snyder today and respectfully ask them to end Michigan's costly and unnecessary gun registration scheme as well as the onerous handgun purchase process. This is an historic opportunity to repeal longstanding gun control which only the most restrictive, anti-gun states currently have. Please act today to ensure that Governor Snyder does not ignore Michigan gun owners. In 2010, gubernatorial candidate Rick Snyder did not answer NRA's state candidate questionnaire, so his position on this vital legislation is unknown.