Cross-posted at The Western Right, Right Michigan, and Red Racing Horses. This post was last updated on August 9.

Michigan will see a number of interesting congressional races in 2012.

Michigan will lose a congressional seat, going from 15 to 14. Redistricting changed the congressional map, particularly in eastern Michigan. 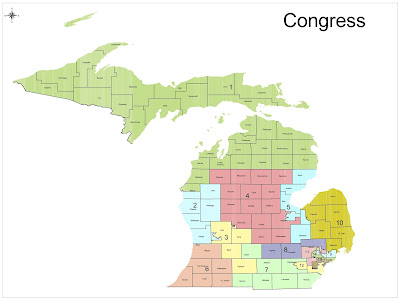 District 1 (Upper Peninsula, Northern Lower Peninsula) Likely Republican.
In 2010, Dr. Dan Benishek won an open seat vacated by democrat Rep. Bart Stupak against democrat state Rep. Gary McDowell 52-41. The new district gets more Republican, adding areas around Traverse City. Benishek has generally voted with the leadership, displeasing some of his former Tea Party supporters. McDowell is back for a rematch, but Benishek will be difficult to beat as an incumbent.

District 2 (Ottowa, Muskegon) Safe Republican.
Republican former state rep. Bill Huizinga won a close primary in 2010 to replace Pete Hoekstra, who was running for governor. Since then he has generally voted the party line. This remains the most Republican district in Michigan. There was talk that conservative state rep. Dave Agema might run, but he declined. Huizinga will run unopposed.

District 3 (Kent, Calhoun) Safe Republican.
Republican state rep. Justin Amash won the primary to replace moderate Republican Vern Ehlers, who retired rather than face a strong primary challenge. Amash is a libertarian in the mold of Rep. Ron Paul. He has stepped on some toes in Washington, most notably getting into a spat with the NRA over procedural objections to a gun rights bill. There were repeated rumors that someone would challenge Amash in the Republican primary, but nobody did. Amash remains the favorite. Moderate democrat former state rep. Steve Pestka defeated leftist Trevor Thomas for their nomination.

District 6 (SW Michigan) Safe Republican.
Moderate Republican Fred Upton has won by wide margins since defeating conservative Mark Siljander in 1986. In 2010, former state rep. Jack Hoogendyk, running with Tea Party support got 43% in the Republican primary. The race received almost no outside attention and Jack raised only $60,000 in that race. Since then, Upton became Chairman of the House Energy and Commerce Committee, and his record received more scrutiny from national conservatives. Upton defeated Hoogendyk 67-33 in a primary rematch.
In 2008 and 2010, Upton easily defeated leftist Kalamazoo city commissioner Don Cooney. In 2012, the democrat John Waltz, dropped out for health reasons. The democrats' new candidate is farmer Mike O'Brien.

District 7 (south-central Michigan) Safe Republican.
Republican Tim Walberg defeated liberal democrat Mark Schauer in a hard-fought race in 2010. This followed Schauer's defeat of Walberg in 2008, Walberg's defeat of RINO Joe Schwarz in 2006, and Schwarz's winning a divided Republican primary to replace Nick Smith in 2004. Redistricting removed Schauer's base of Calhoun county, and he is not running again. Walberg tends to be underestimated, but even in 2008, facing a strong opponent supported by Schwarz in the worst Republican year in memory, he only lost by 3%. Walberg defeated minor challenger Dan Davis, as Mike Stahly was disqualified.
Schwarz toyed with running as a democrat, but declined. Attorney Kurt Haskell, who seems to be a paleocon, won the democrat nomination over Jackson County democrat chairman Reuben Marquez. Walberg will never win the margins of Camp, Rogers, or Miller, but I suspect he will settle in and win 55-60%.

District 8 (Ingham, Livingston, N Oakland) Safe Republican.
Republican Mike Rogers has won big margins since 2000, and he should have no trouble with his new district. He defeated two minor primary challengers, Dan Hetrick and Vernon Molnar. Lance Enderle will be the democrat nominee, as Michael Magdich was disqualified.

District 9 (S Macomb, Royal Oak, Bloomfield) Safe democrat.
This is mostly the old 12th district of Sander Levin, though it also takes in part of Gary Peters' old 9th district. This district is less liberal without Southfield and Oak Park. Levin is more liberal than the district, but he is popular enough to win here as long as he wants. He will likely be succeeded by a less liberal Macomb county democrat. Republican Don Volaric, who lost to Levin in 2010, won the nomination over Greg Dildilian.

District 10 (N Macomb, the Thumb) Safe Republican.
Republican Candice Miller is highly popular in Macomb County and statewide, and that isn't going to change. Jerome George Quinn and Chuck Stadler will compete for the democrat nomination.

District 13 (W Detroit, Westland) Safe democrat.
This district contains the bulk of John Conyers' base, although Republicans drew him out of the district. Conyers, in Congress since 1964, hadn't had a tough primary or general election since 1994. Conyers' image has been tarnished since his wife Monica, formerly Detroit city council president, pled guilty to bribery and is now serving time in federal prison. He was challenged in the democrat primary by state senator Glenn Anderson, whose base in the mostly white suburbs of Westland and Redford was moved from McCotter's district into the 13th; Senator Bert Johnson, who is a convicted felon since he robbed a country club at age 19; State Rep. Shanelle Jackson; and John Goci, as Godfrey Dillard was disqualified. Conyers won 55% to 18% for Anderson and 13% for Jackson. Harry Sawicki is the Republican candidate.

District 14 (E Detroit, Southfield, Farmington, Pontiac) Safe democrat.
This district had a very interesting primary. The majority of the district is the old 13th of democrat Hansen Clarke, who beat the scandal-plagued Carolyn Kilpatrick in 2010, though he was drawn out of the district. Congressman Gary Peters, whose old 9th district was split into four pieces, ran here. This was the best of several bad options for him. Also running were Southfield Mayor Brenda Lawrence, former state rep. Mary Waters, who has pled guilty to filing a false tax return, and Bob Costello. Peters did very well in endorsements and fundraising, and he won this majority black district 47-35-13 over Clarke and Lawrence. John Hauler is the Republican candidate.
Posted by Conservative First at 6:30 PM