The first and second parts of my analysis of redistricting the Michigan state house focused on Wayne County and Oakland/Genesee Counties. The first article contains the basics on the rules that any map must follow.

In part III, we consider Macomb County. We have seen that districts in Wayne County can be drawn to avoid a break, and Lapeer County can constitute its own district. Since I grouped Oakland and Genesee together, either Macomb must be unbroken, or it must share districts with counties in the Thumb, particularly St. Clair.

Currently Macomb has about 8.8 districts. It saw the largest numerical increase of any county in the state, gaining 52829 residents (ideally about .6 districts). Its ideal number of districts is now 9.36.

One possibility for Macomb is to overpopulate its districts so that it has exactly nine. This would average a population of 93442. There are two problems with this. One is that overpopulated districts need to be balanced with underpopulated districts elsewhere in the state. This makes drawing the whole map difficult. The second problem is that not breaking Macomb leads to breaks in Sanilac and Tuscola.

Another possibility is to share 11 districts between Macomb and St. Clair. This gives an average of 91274, which is still pretty far over. It also leads to a break in Tuscola.

Instead, I opted to combine Macomb, St. Clair, Sanilac, and Huron into 12 districts for an average population of 90021. This avoids any county breaks in the Thumb.

City and township breaks must also be considered. There must be breaks in Warren, Sterling Heights, and Clinton due to population. There also must be a break either in or around Shelby. I have not found a map with fewer than five breaks (counting double breaks).

The ‘new’ district is squeezed in to contain Port Huron, the second-to-the-top tier of townships, and the top tier of Macomb County. No district with Port Huron is completely safe, but this district is likely to elect a Republican. The Chesterfield district is shoved over to Washington, which should make it safe.

Here is the map. There are breaks in Warren, Sterling Heights (double) and Clinton (double). 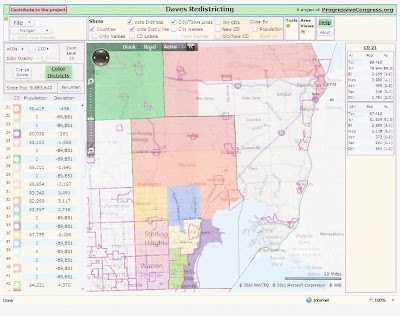 Hence we have the following ratings: