Calhoun County has completed its county commission redistricting. The apportionment commission voted 3-2 to support a plan by Clerk Anne Norlander. The vote was along party lines.

Calhoun County had very minor population changes. It lost about 1800 people overall, with the biggest changes being losses of 1000 in Battle Creek and 500 in Albion. While many counties are cutting the number of county commissioners, Calhoun has only seven and no compelling need to change that number.

Unlike neighboring Kalamazoo County, much of Calhoun is swing territory. A majority (4/7) seats flipped to Republican in 2010. Most of these had been picked up by democrats over the past decade.

The swingy nature of Calhoun makes it difficult to gerrymander, even if you want to. With seven districts, the numbers work to have Battle Creek and Springfield make up three districts. Then Bedford, Pennfield, and Convis naturally make up a district. The rest of the county almost has to have districts based in Emmett, Marshall, and Albion.

The Norlander map can almost be considered a 'least change' map. The descriptions of the districts (both before and after) follow. They can be compared to the current districts here. The partisan percentages come from the 2008 sheriff race (51% R countywide). 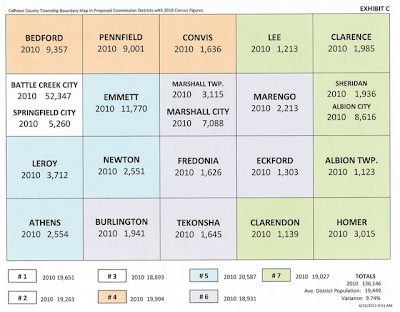 Districts 4 and 5 are unchanged. Clarendon is moved from 6 to 7. This makes 7 a bit more friendly for its Republican incumbent, but it will be difficult to hold in any case. In Battle Creek, 1 loses one precinct to 3. Districts 2 and 3 trade a few precincts. District 2 remains the most heavily minority district at 30% black. The democrat plan seems to have attempted to make district 1 more democrat.