Along with congressional and state senate maps, the state legislature will also redistrict the state house of representatives. The current state house map was drawn by Republicans, but has hardly any partisan slant at all. Its architects thought it would elect a large Republican majority, but control shifted to democrats in 2006 and 2008 before returning to Republicans in 2010.

State house control is more likely to vary since representatives are limited to three two-year terms and elections are held in both presidential and off-years, unlike the state senate.

Many of the rules for legislative district maps are the same as for congressional district maps. In particular, the Apol standards require that there be a small number of county and city/township breaks. These standards cannot legally bind future redistricting plans (LaRoux v. Secretary of State), but it is likely that any plan passed will at least come close to following them.

This makes it easier to avoid breaks. Many counties do not need to be broken at all. The first part of my analysis of the state house redistricting will focus on Wayne County. Wayne’s ideal number of districts is 20.26, so the ideal population for a district is 91029.

The Voting Rights Act is commonly understood to require black-majority districts when possible. There are currently ten black-majority districts based in Detroit and one each in Southfield and Flint. There is also one significantly Hispanic district in southern Detroit. Given that Detroit lost 220000 people out of the 240000 loss in Wayne County, Wayne County will lose three house seats, dropping from 23 to 20. Three districts must be shifted elsewhere in the state.

Republicans will want to improve their prospects as much as possible. In the 2002 election, they won five seats and came close in two others. The five they held were the Grosse Pointes, Dearborn, Livonia, Plymouth/Northville, and Canton. The two that were close are Redford and the southern tier. The Grosse Pointes flipped in 2008. The population of this district needs to expand, and can only add part of Detroit. Demographic changes (blacks moving in from Detroit) mean this district is now out of reach. The same is true for the Redford district.

The first map below has eight black majority districts. It breaks Detroit in four places and four other cities (Livonia, Dearborn, Westland, Taylor). 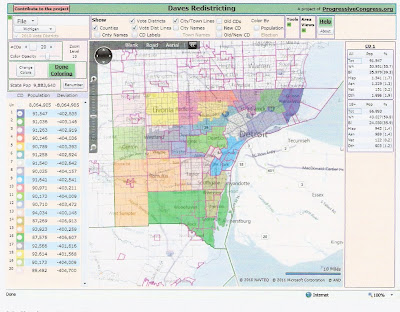 The second map below has ten black majority districts. It adds three more breaks in Detroit and one more break (Dearborn Heights) outside. 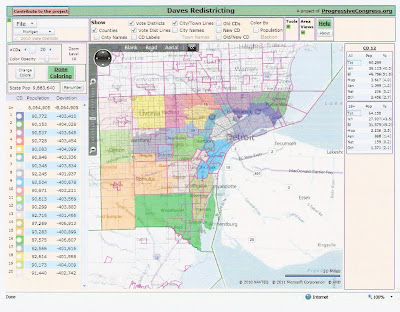 Note that it is just barely possible to create a Hispanic majority district, but only by breaking four jurisdictions (Detroit, River Rouge, Ecorse, Lincoln Park).

For Republicans, the biggest benefit in Wayne County is the fact that three of its districts will move to more favorable parts of the state.
Posted by Conservative First at 12:28 AM

What's the plan to deal with population shifts in Washtenaw Co.? The 52nd and 54th in particular will need some adjustments, as will the 55th it appears. Any thoughts?