The Michigan Democrat Party has released its proposed redistricting plan for the Michigan state senate. I previously released two possible maps and discussed the standards that such maps must follow.

Here is the map. 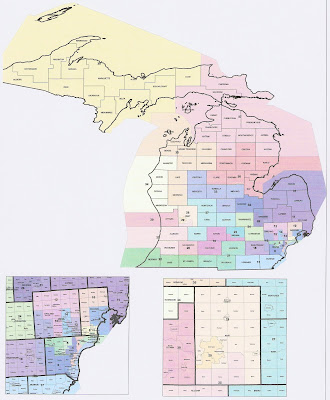 Michigan Democrats Introduce State Senate Redistricting Map
Map is Fair, Representative, and Avoids Partisan GerrymanderingLANSING - Michigan Democratic Party Chair Mark Brewer announced today that he has filed a redistricting plan with the State Senate Committee on Redistricting that would ensure voters are fairly represented in Lansing by creating sensible and competitive districts. The Committee had invited the public to submit maps for consideration and Brewer stated that this map deserved their attention.

“Redistricting should be politically fair and avoid partisan gerrymandering when drawing district boundaries,” said Brewer. “The map we’ve submitted is politically fair with 15 Republican, 15 Democratic, and eight swing districts, doesn’t create a single district boundary that would split a city or township in two, and only splits six counties. In short, it’s a map that simply makes sense.”

It is also false that the map “only splits six counties”, since it clearly splits seven (Wayne, Oakland, Macomb, Kent, Genesee, Washtenaw, Ingham), including a double split of Genesee. In comparison, my maps both split only six counties. One has a double break in Genesee, the other does not.

Brewer added that the map also follows the requirements of the Federal Voting Rights Act by creating six “majority-minority” districts, five of which would be based in Detroit and one in Oakland County due to the growth of the African-American community through southeast Michigan.

Brewer is wrong about what the Voting Rights Act requires. This article is the best guide to the VRA that I could find.

(Before you flip out, yes I realize that the article comes from Daily Kos. It appears that the author is playing it straight. Of course, second opinions from the legal-minded commenters here are welcome.)

The VRA may require black-majority districts, but it almost certainly does not require “majority-minority” districts, where all the racial minorities are grouped together to form a majority. The second and third standards from Thornburg v. Gingles are definitely not satisfied. While there is nothing prohibiting a majority-minority district in Oakland, it is definitely not required. It is not even clear that Michigan is required to maintain five black-majority districts, given the massive population loss in Detroit. This would be a much closer call, however.

“This is Governor Snyder’s chance to show that he’s willing to put the interests of Michigan’s voters ahead of the interests of his own political party,” added Brewer. “If he is willing to dismiss this fair redistricting plan and instead sign one that is simply a partisan Republican gerrymander, he will send a very clear message to the people of Michigan; that he is just another Lansing politician beholden to special interests.”

There is nothing terribly outrageous about this map, but it is a modest gerrymander and is probably about the best democrats could do without massively violating the rules. Their strategy is not hard to understand. Since they have no control over the process, they will present a slightly slanted plan, claim it is “fair”, and hope to guilt-trip Republicans (Snyder?) into compromising. It isn’t terribly likely to succeed, though it has some nonzero chance (a similar gambit seems to have worked for Republicans in Arkansas).

What is gerrymandered?
Let’s rate the districts.

Here is a summary of the ratings.

Some parts of the map are actually the same as what I drew. These areas are pretty much forced by the need to avoid breaks. Interestingly, five of the eight tossup districts would have no incumbent and another would pit two Republicans against each other. Just a coincidence, I’m sure.

In any case, this map is not likely to be adopted.