Recently a surrogate of Fred Upton posted an article promoting Upton and attacking Jack Hoogendyk on RightMichigan.com. It was a shoddy piece, with no documentation and with the same paragraph copied twice. It was the usual tripe that Upton's supporters have been spreading on Mlive.com and elsewhere.

There was nothing too remarkable about this. RightMichigan's regular readers quickly tore the piece apart in the comments.

Then, a few days later, what should arrive in my mailbox? 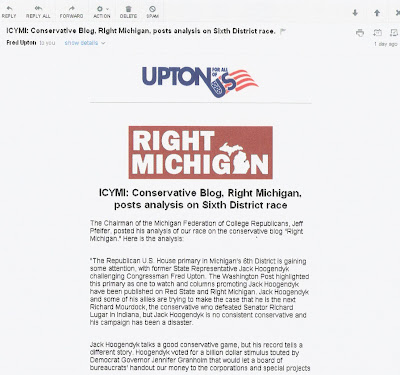 The headline states that RightMichigan.com posted the analysis. This is false, except in the sense that it allowed a user to post the piece. As far as I can tell, he has never posted on the site before. The editor of RightMichigan, Jason Gillman, has endorsed Jack Hoogendyk, as have most if not all the regular contributors to the site (including me).

Notably, Upton's email does not have a link to the piece, unlike many of his other "in case you missed it" emails. This is probably because of the way the piece is shredded in the comments.

Upton trying to imply that Michigan's top conservative blog supports him when it doesn't is yet another addition to his disgraceful campaign.

See also: Maybe It Was A Frathouse Initiation
Posted by Conservative First at 3:12 PM

Thanks for the accurate analysis.

Its a shame the dirty tricks by Fred's minions need to happen, but smart folks can decipher pretty fast.

Keep up the good work.